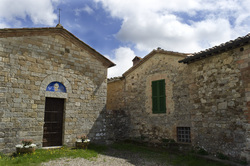 The history of Borgo Petrojo goes back to Roman times when it is presumed that it was already inhabited. Testimony to this ancient origin may still be clearly seen in the walls called “Opus Reticulatum” very prominent in the farm, which was part of the original Petrojo Burg, called “Il Paradiso”.

Around this Roman base, in successive eras, a medieval tower was added and later a farm house, chapel, rectory. As they were needed they were needed by the people living there, many other buildings were built and attached.

The gravel and stone road which passes directly in front of the main nucleus of the village is still in use and leads to the small church dedicated to St. Michael Archangel.  This ancient road has, since medieval times, connected Siena to Florence through the Chianti Classico countryside.

For many years the small church, which once served the town of Quercegrossa, was abandoned but recently thanks to investments by the Lenzi family and with the approval of the Curia of Siena, it has been restored and is once again able to host religious ceremonies. Indeed it seemed a pity not to recover a church where, more likely than not the painter Jacopo della Quercia was baptized.

Fattoria di Petroio was originally part of a huge agricultural nucleus, which included the properties of Fattoria di Chieci and Passeggeri. The lawyer Andrea Pallini purchased both these properties at the beginning of the 1800. In 1920 Petroio was given to Luigi Pallini, nicknamed Gigi “the beast”, grandfather of the present owner Gian Luigi Lenzi.

The main villa was amplified and modernized in the beginning of the nineteenth century and again in 1925. However during that time it never changed the characteristic aspect of the typical Villas in Chianti, with its welcoming drive of secular cypress trees.

Recent remodeling and reconstruction have aimed, on the one hand, at re-qualifying all the old buildings of the burg; the overseer’s home, the wood shed, the storage buildings, etc. and on the other at modernizing and restoring the cellars, the tasting room and the olive oil room.